Since its groundbreaking in 2000 and its formal opening in 2001, FAITH Colleges has contributed much not only to the City of Tanauan, but also to the entire CALABARZON region opening new doors and immense opportunities for its students and its community. Here, we travel through time as we look back to the last 20 Foundation Day celebrations, and the milestones for each year.

2000. Groundbreaking for First Asia Institute of Technology and Humanities

2006. Our Community: Living and Learning Together

This was the turning point when the twin events of the Taal Volcano eruption and the global COVID-19 pandemic changed our lives forever.

Learning amidst a pandemic

Blasting into the past: Remembering our Foundation Day celebrations

Blasting Into the PastThe past 20 years have been a rewarding journey for FAITH Colleges. Amidst these unprecedented…
byThe Editorial Team

Welcome to the very first showcasing of the Christmas Lights of Batangas. Having been locked down in our…
byThe Editorial Team 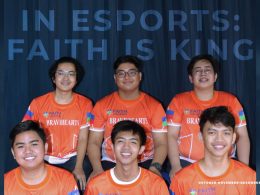 Learning amidst a pandemic

WHEN the government announced the community lockdowns on 17 March 2020, Philippine schools were forced to shift to…
byRosalind Muñoz-Landicho